In April 2015, the Malaysian Ministry of Higher education released a 10-year strategy plan, the Malaysia Education Blueprint 2015-2025 which took two years to compile. In a video of the prime minister’s speech that discusses the strategy, he discusses the goals and deduces the plan to three main aspects referred to as the three B’s:

If you want to alter your own recruitment strategy, you can leverage QS’ online marketing strategies to boost student acquisition!

Our three student websites are dedicated to helping undergraduate and graduate hopefuls prepare for their next educational journey. Yearly, these sites attract millions of visitors, ready to engage and find out what you have to offer.
QS Online Recruitment Strategies

The Deputy Prime Minister and Minister of Education Malaysia – Tan Sri Dato’ Haji Muhyiddin bin Haji Mohd Yassin wrote in the introduction of the document “The Government has set ambitious – but achievable – aspirations to transform the higher education system. These aspirations constitute two aspects: those for the education system as a whole, focusing on access, quality, equity, unity, and efficiency; and those for individual students, covering the six primary attributes – ethics and spirituality, leadership skills, national identity, language proficiency, thinking skills, and knowledge.” 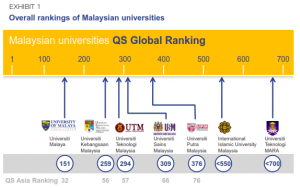 Malaysia has already shown great improvement in the last 10 years with a 70% increase in student enrolment in Higher Education institutions reaching 1.2 million students. The system will look on building on the following five aspirations:

Within the Quality aspiration of the report, the Ministry aims to place one university in Asia’s Top 25, two in the Global Top 100, and four in the Global Top 200 by 2025. They are also looking to improve Graduate Employability to raise it to over 80%. The system will also change from focusing on university education as the pathway of choice to placing an equal value on both university education and technical and vocational education and training (TVET) pathways.[iii]

Further information can be found in the Malaysia Education Blueprint  Report 2015-2025.

[i] Reference to the QS World University Rankings mentioned in the Blue Print document.

About the Author: Deena Al Hilli