Discussions surrounding Massive Open Online Courses (MOOCs) have increased with an international momentum attracting both proponents and opponents. Perceived as a response to an ever digital and highly connected world, MOOCS are a platform for thousands of courses offered by world class institutions. This global platform continues to grow in popularity expanding far beyond the US. Multilingual platforms are now available in China and France, while Latin American and Middle Eastern initiatives are underway.

MOOCS, however, are still in their infancy and yet to glean global recognition from recruiters.

In order to measure employers’ perspectives, QS Intelligence Unit canvassed recruiters and their position on MOOCs in the annual QS Global Employer Survey.

Recruiters were asked whether they were familiar with MOOCs and of the 4,654 employers who responded, 71% said that they were not.

Perhaps what was most interesting was the regional distribution of responses. The highest proportions of recruiters with awareness or familiarity of MOOCS were based in Eastern Europe and US & Canada, from Kazakhstan, Russia and the United States. Latin America and Western Europe evidenced the greatest proportion of graduate recruiters who were unaware of MOOCs. A greater proportion of recruiters from Africa & Middle East displayed a  familiarity in comparison to their Asia Pacific counterparts.

A regional breakdown is presented below: 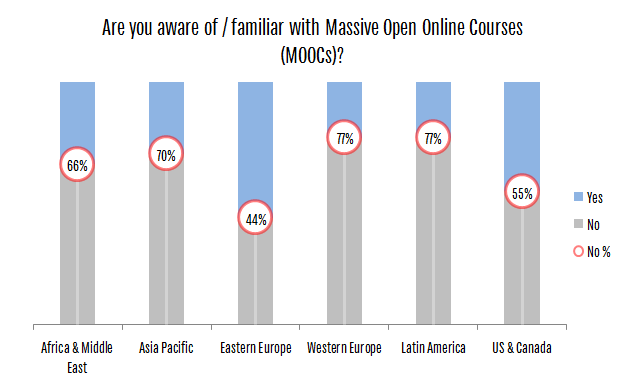 Those sectors to which  respondents responded positively were Consulting (24%), closely followed by Technology (22%) and Industry (17%). 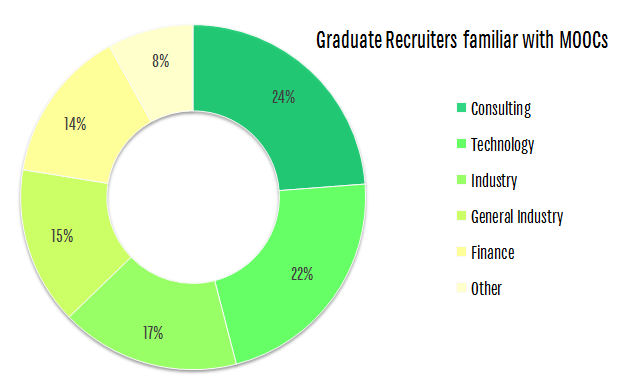 Tracking a quickly evolving initiative such as MOOCs would be essential for higher education sectors and potential students alike. We at QS will continue to monitor the evolution of this phenomenon with the aim of maintaining a pulse on the market.

About the Author: Susan Gatuguta-Gitau