The Skills Employers Want from AI and Tech-Based Graduates

The Skills Employers Want from AI and Tech-Based Graduates

The prevalence and growing knowledge of technology and Artificial Intelligence (AI) has lead to drastic integration into higher education. Many computer science faculties and departments have significantly increased the number of specialist courses they offer, with artificial intelligence degrees being the most recent inclusion.

It is critical that we understand the role that Artificial Intelligence could serve in a future labor market. With that knowledge comes with it the ability to have this translate and prepare those studying AI and other technology-specific courses for, potentially, unprecedented changes.

How could AI influence the future labor market

AI can be useful for handling big data. Datorama has begun using it to deal with fraud protection, billing systems, and data integration. To complement this, it has been suggested that AI may even start to appear in other areas where it can assist professionals on the job. This could include the implementation of a new software that would allow a person to allocate their time to strategy as opposed to managing data.

Not only can AI support current job roles, but it may also open up avenues for new tasks for workers, with potentially greater monetary incentive. Between 1980 and 2000, the need for additional work that had stemmed from technological change had accounted for around half of the new employment creation in the United States.

It is important to consider that humans possess capabilities beyond the exhaustive, data-focused remits of AI. Most notably, the three things that are harder for a machine to achieve is to exhibit creativity, social skills, and perceptiveness. This may well fuel the argument that workplaces would not function without human interaction.

Which skills are most valued in the Technology industry?

In reference to last year’s QS Global Employer’s Survey, we wanted to measure how valuable a range of graduate skills were by having employers rate them by the level of importance against their satisfaction with each graduate skill. 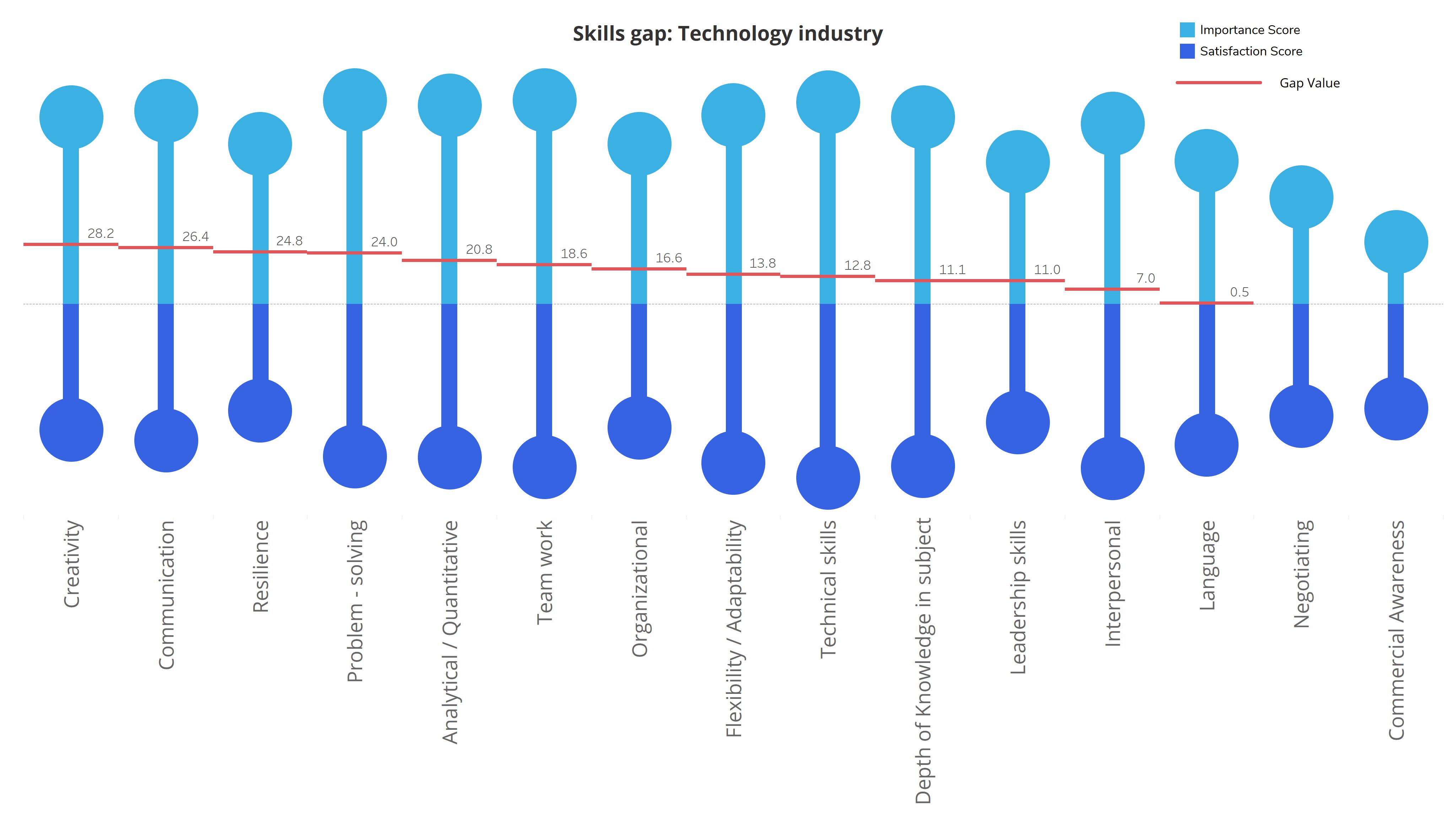 Having collected over 500 responses from employers in the tech industry, creativity had the widest gap value from a range of skills that employers look for in tech graduates. A close second, with a gap value of 26.4, was communication. Both serve as skills and aspects accepted as difficult for AI and technology to replicate, or get close to the level of sophistication and complexity that human decision-making and thought-processing presents.

If we are to delve deeper into this correlation, it could be argued that employers want graduates to compliment AI and ensure that the currently unattainable cognitive skills for technology, are subsidized by graduates.

The need for human skills should minimize fears of a shifting, technology orientated work-place with a reduction in job opportunities and instead influence specialist computer science courses, such as with AI, to help nurture their students’ creativity and social development to coincide with technological advancements.

If you would like to find out more about the relationship between graduate skills and employer expectations, access our full report here.